Consumer spending in the US grew at its fastest pace in three years during 2010, official figures have shown. 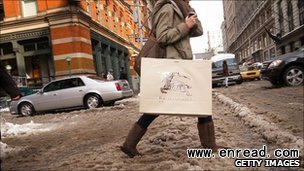 Consumer spending makes up more than two-thirds of activity in the US, the world\s largest economy.

The 2010 levels were helped by a strong December, where spending grew by 0.7%, the sixth （连贯的） month of growth.

Consumer spending makes up more than two-thirds of activity in the US, the world's largest economy.

Rising incomes and the faster increase in spending meant that the rate dipped slightly in December, the data showed.

expect that spending and savings will be boosted further in 2011, if the job market continues to slowly improve and with a cut in tax.

"As hiring picks up this year, income gains should accelerate noticeably（显著地） , providing fuel for both modestly faster spending growth than in 2010 and a renewed rise in the savings rate," said Stephen Stanley, chief for Pierpont Securities,

However, there is concern over whether these gains will be enough to （抵消，补偿） further cutbacks in government spending and the weak housing market.

Last week, figures showed that US economic growth accelerated in the last three months of 2010 to an annualised（年度的） rate of 3.2%, up from a rate of 2.6% in the previous quarter.