The value of and acquisitions activity in the and defence industry hit its lowest level in a decade in 2009, a report suggests. 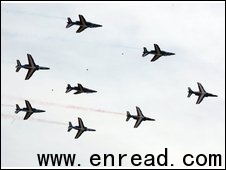 Defence and airline spending has been curbed sharply

Concerns about costs, delays, lower military orders and reduced passenger and freight（运费，货运） travel had led to the falling value of orders, it added.

However there were a flow of deals for the surveillance（监督，监视） and security .

The actual number of deals done in 2009 was "near record levels" the report said - but they were primarily smaller transactions（交易，汇报） .

PricewaterhouseCoopers said that if stock markets continued to rise and if borrowing money became easier and cheaper, then firms would have more financial to consider larger targets in 2010.

"As we look ahead into the new decade, small and strategic is likely to remain the name of the game in the short term but major restructuring forces are likely to be felt increasingly strongly in the long term with consequent（随之发生的，作为结果的） implications for deal strategies and values," said the firm's global aerospace and defence leader, Neil Hampson.

The two largest deals of 2009 were General Atlantic's .65bn move for defence consultancy firm Tasc and Boeing's bn takeover of a factory owned by US firm Vought, used to build the 787 Dreamliner.

However these were small compared with 2008's biggest deals, which were worth .6bn and .2bn.